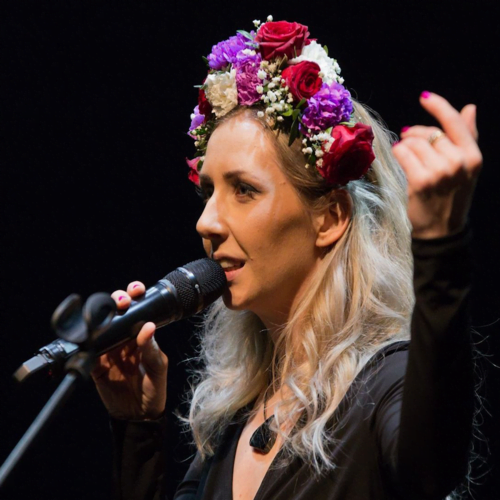 Venla Ilona Blom (b. 1985) is a multi-award-winning vocalist, composer and beatboxer from Finland. For the last decade she's been touring the world with an all-female vocal performance group Tuuletar. Their compositions have been playlisted in radio shows all over the world and used in TV-series such as Game of Thrones (HBO), Wentworth (FOX), The Rain and Monarca (Netflix). Tuuletar has performed in festivals and concert halls in four continents and 34 countries.

Aside from Tuuletar, Ms. Blom workes as a soloist, composer and performing artist. She has participated in several multicultural art projects as a researcher, musician and educator. She is an awardee of the Finnish Cultural Foundation.
Social Networks:

The world is filled with rich and diverse musical traditions. As a musician, composer and performing artist I dig in to these traditions to explore the unknown and to find new ways to use my instrument – my voice. Tradition offers persistence and inspiration and I strongly believe, that opening my eyes, ears and heart to different cultures and people, is leading me towards better artistic understanding and more innovative musical results.

Within the last decade, I have spent more than half of my time touring and living abroad. When the pandemic shut the world down, I was in New Zealand with my band. We were just about to finish our three-week-long concert tour when we were suddenly addressed to get the first possible flight back to Finland. Now, one year later, I have not left Finland once during the last 12 months and I believe it is the longest period of me not travelling since my childhood. It has been a heavy and educational year where I’ve been putting my artistic focus under a big, screaming question mark. By writing this blog post, I attempt to observe and reflect my artistic approaches and my thoughts about global identity. I did two residency periods in AARK within the last year (July 2020 and February 2021).

In 2017 I spent a month in Nepal doing field work amongst the local musicians and villagers. After my trip, I wrote a paper about my experiences and remember writing down the following sentence:

“In the heart of Kathmandu, sitting in the eye of traffic, dust and confusion, I felt calmer and more centered than in ages. Indeed, sometimes surrounding chaos can manifest as a sublime inner serenity”.

In AARK I feel the opposite. The tranquility provided by the powerful nature and the people on the island can create an inner space, where a much-needed stream of chaotic melodies, perplexing rhythms and odd body movements start to float out - in a perfect disharmony. To me, this is creativity. It’s unpredictable, dysfunctional, messy and out of control – and that’s why I live for it.

In a world where everyone is constantly encouraged to “figure things out” or figure themselves out, art provides me the freedom of not understanding, not controlling, not knowing. The only other thing that provides the same type of experience is travelling. Before the corona virus took over the world, I was constantly on the road. I travelled for my work, to see my friends, to educate myself and to experience – the world, the cultures, the people. I was never tired of going, never tired of leaving – perhaps because it didn’t feel like leaving, it felt like arriving. The cliché-ish sentence it’s not about the destination, it’s about the journey can indeed make sense. For me, the fundamental fulfillment in life is found in the moments of total confusion, where nothing matches – yet all is well. Some might call the constant need of being on the move a form of toxic escapism – I call it home.

The concept of home has tantalized and triggered my thoughts and emotions fairly often within the last year. During the first lockdown in Spring 2020, I was (trying) to write a screenplay and score for a new solo piece. I spent days and weeks at my home studio reading difficult literature about modern technology and researching my own mind and body. I composed a bunch of drafts and wrote down dozens of pages about anxiety, meaningfulness and freedom. Since the self-isolation was forced on me, like it was for all of us, for the first time in a long time I felt prisoned in my own home. Paradoxically, I was trapped in my isolation yet felt the true meaning of liberty kicking in harder and more brutally than ever before. I felt the form of liberation that was unfamiliar to me – it was unpleasant, hard and extremely informative. Through meditation (/frustration), I found myself creating daydreams of new dreams which is a double-layered cake of imagination. Little by little, I started to feel a fresh connection rising from within - I was isolated from the world but not alone in the world.

The first lockdown ended in May 2020 and I arrived to AARK in July. I spent two weeks composing and developing the ideas that I’d created during the lockdown period in my home studio. My main focus was to give the existing drafts new surroundings, bring them out from the studio, from the musical sheets, from my head. I sang the melodies while walking in the forest. I danced and made choreographies by the shore to the rhythmic patterns and words I’d written down. I recorded the sea, the wind and the sounds from the ferry to blend in together with the electronic landscapes I’d created. I discussed about life, religion, music and politics with the other artists in residence, the islanders and obviously with Renja and Benkku.

During my stay, I had long phone calls with my producer about my work. One day he said that he started to hear a shelter in my music. To me, that shelter represents the comforting feeling of reaching for the unknown. AARK provides me the same feeling of belongingness that I can find within my travels, or within my art. When something’s not familiar, it’s easier to see all the primal dimensions within yourself. In a globalised (music) world, treasuring one’s roots is essential, if you want to keep a tradition alive. But it is equally important to let your branches grow and leaves fly and search for inspiration from other cultures and people. And if you water the plant, the roots will grow as well.

I returned AARK in February 2021, after a year of cancelled concerts, projects and tours – after a year of not travelling, not leaving, not arriving. I returned to the place that was no longer unfamiliar yet still so fresh, so inspiring and so unpredictable. I feel that during my second stay the creative flow was just as Renja once described the life on the island:

“It’s never still. In each moment, there is a new breeze coming just behind the horizon. During the warm summer nights, the long dark November hours, the heavy snow blizzards and first promising glimpses of the spring light LIFE NEVER ENDS. And you can see it, really see it all.” (Renja Leino, 2020)

I sincerely feel that certain places, people, songs, paintings or even flavors or colors can create an astonishing feeling of belongingness. These feelings are easier to reach when you expect for nothing and believe in everything.

I want to thank Renja and Benkku and all the other beautiful artists in residence, Jaakko, Marja and Susanna, who’ve shared a great deal of themselves in the shelter of AARK and island of Korppoo. These encounters, experiences and moments surely gave my global identity a much-appreciated local hug.

During my time in AARK in July 2020, I finalized two compositions and arrangements Pohjanpalo and Vetten vuoro that are now released on this digital EP Tuuletar – Vetten vuoro / Turn of the Tide (Bafe’s Factory, 2021)

In February 2021 I worked on my solo performance “Woman Machine” which will (hopefully) premier in early 2022. My work is supported by Kone Foundation, Wihuri Foundation and Arts Promotion Centre Finland.