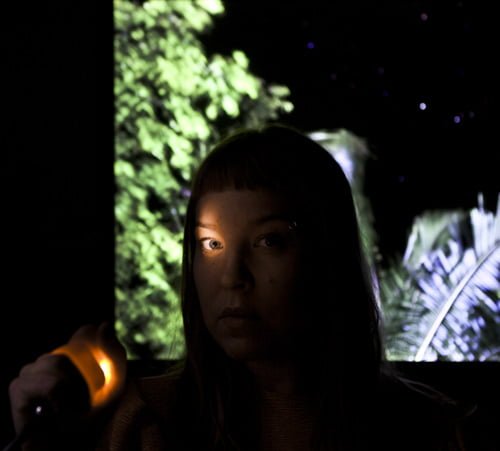 Author:
Lilli Haapala
Website:
www.lillihaapala.com
Bio:
Lilli Haapala (born 1984) is a Finland based artist working in the fields of media art, installation and site-specific arts. Her works are handling themes as human relationship to natural environment and to the other. Currently she is working with a project called Searching for utopia.
​
Haapala is is granted by Merita Art Foundation’s Young Emerging artist Scholarship in 2018. She has graduated from The academy of fine arts for a Master of fine arts in 2017, and she did her BA. in Turku Arts Academy in department of photography.
Social Networks:

"It is not down on any map, true places never are."

I am Lilli Haapala, an artist living in Turku, Finland. I spent my first month in Aark in 2015 October and after that I have been visited in the island many times in different durations, as well as several times in other islands in Baltic Sea: Örö, Kökar, Seili and Utö. I am a board member of Aark as well.

The Project I called SEARCHING FOR UTOPIA started in archipelago years ago. It all began from a question that What in this world I see, is real and what is false? What things do I consider as truth? In this text I will open up my artistic practice over the years in archipelago and write about how I feel about the island phenomena and the concept of utopia.

For centuries people had been fascinated by islands for their mythological attributes, but also for the discoveries of new worlds and cultures. Islands are symbols for paradise, utopia and isolated ideas.

Everytime when I spend time on islands I start to feel myself as an explorer living on the mercy of natural forces. I made expeditions to new places and spent time in a beautiful retreat, quietly in my own company. Spending time in artist residencies on islands made me stronger and smaller at the same time. I feel like I am somehow nearer the truth when I spend time in a natural environment. It is like a meditation, thoughts come and go, like clouds in the sky. I have time to be with myself and with my thoughts, being inside of my own truth. I miss that feeling, and often I lose it in the city.

When you think about islands there is very romantic idea hidden in the image: Nature can be super pittoresque, you are surrounded by a natural environment with the winds blowing from the sea carrying the freedom within. But in reality, no such thing as total isolation exists, nor stagnant image. The world is changing and reforming all the time. Pictures and images are stuck in their frames and croppings. John R. Gillis writes in his book called Islands Of The Mind interestingly about islands: Island occupies a great deal of mental space for people: "Islands have become a source of personal and social identity for millions of people who never have been or even will be resident islanders. They just wanted to visit in island, they just wanted the idea".

Islands have become a kind of a symbol element also for me and my artistic practice, it became an image for utopia as well. I fell in love with those floating islands that I saw on the horizon on a special weather. I haven’t understood those mirages before, how they appear. It is all illusion. How can I be sure how reality really is if I can’t believe my eyes?

In my island times I paid attention to boundaries between things, surfaces that delimit things from each other, like my skin demarcates me from everything else, but only seemingly. I dove under the water’s surface and looked at it from the seabed. I was very inspired by the thoughts of philosopher Gaston Bachelard on how the elements of nature guide our imaginations. According to Bachelard, water acts as a reservoir of emotions and invites you to dream. When we look at water contemplatively, we look not only at the imagery on its surface but also at the depths of the water where its own world opens up. Water itself can provide a deeper perspective on the universe and ourselves. I stayed pondering what kind of dreaming is possible without contact with nature.

The Water that flows inside me, the water we drink and touch is the same water that erupted as a stream at the origins of the earth. The air that has circled the world so many times, that air you have breathed as well, circulates in my lungs. We are bodies of water. (Bodies of water – Astrida Neimanis).

The word utopia can be difficult to define. Utopias are such subjective things, but on the other hand it can be very political too. What could be a common utopia or even the most common utopia? Utopia is always on ahead in the future, and that can make it hard to imagine (or easy if your mind is free). For me I realize it's mostly hard because the future I imagine doesn’t look very rosy at the moment. When I imagine 100 years ahead I just see more machines, more landscapes of sci-fi movies and dystopia, big cities with blinking lights, no trees, no parks or plants living with us. More like a dystopia for me. I guess I have become too realistic dreamer over the years, reading all the scary facts of climate change and capitalism that cannot be prevented. I got too serious. On the other hand it is the dystopia that makes one dreaming of better times, better places!

I wonder what kind of relationship we will have to the earth and to the others, to non-human beings. It feels like technology is always in between us and will always be, as far as I can think. Why should there always be something in between us and the earth? What could the future be like if we would not be so dependent on technology? Technology is a great thing in many ways, don’t get me wrong, I am just afraid that we lose out contact on everything else that really matters for us to survive. There are just so many contradictions and I am afraid that we get lost in technology.

The word Utopia is derived from Greek words, ou (not) and topos (place) – a place that don’t exist. Utopias used to be seen as places, or places that don’t exist. They can be some places yet to be discovered, or just myths of perfect communities, religional places or real ones that oceans have swallowed. Platon’s Atlantis is the most famous utopian myth about a city that has fallen under the ocean. Atlantis was an ideal state. It has inspired me a lot but maybe the most interesting story of history I found is that some people believed for example Olof Rudbeck in the 1700's that Atlantis was situated in Baltic sea or Atlantis was Sweden itself. Also few years ago divers in Sweden discovered a rare collection of Stone Age artefacts buried deep beneath the Baltic Sea. Interesting indeed!

In 2019 I made small sculptures on three Island's shores (Korppoo, Örö, Kökar). Sculptures were out there the whole summer 2019. They symbolize new beginnings, ideas, for me the myth of Atlantis as well, as I imagined that these sea seeds have floated on these beaches from the island of Utopia. I see them as fragments of the perfect world or of possible forms to become. Those three island’s residencies developed  together this program (Between islands) and invited international and finish artists to join with artworks. Aark offered a residency period for working and we get to know each other with other artists. (Aark, Öres and Kökar Culture.)

Perception of time has changed a lot since the 1700's, as have our perception of reality as well and knowledge of science. People in earlier centuries used to see time more like a state or a place. Island somewhere could present the past for example. Today we see time differently; it is a linear way; future ahead and past behind. "Also utopian thinking “moved inland”, becoming landlocked but also less spatialised, it became some time rather than somewhere.” (John R. Gillis –Islands of the mind)

The word utopia is very socially charged, and I think that I will use it differently. I will expand its meaning from human perspective to also comprise other than human cultures. Utopia as a concept has been framing my practice for a few years now and it has been a very helpful tool for me even to understand my own thinking better and who I really am. My artistic processes are sometimes so rambling, it feels liberating to work within or under some concept. A concept that, however, contains so many other things as well and It intertwines everything together; nature, imagination, reality, false, islands, ecology, dystopia, expeditions, beginnings, idealism.. ect.

My artistic practice is about the relativity between humans and earth in general or/and relativity with non-human beings; the other us in us. When I look at our time, something screams inside of me: what about interconnectedness and empathy? I feel like for me the word utopia comes with these things. For me utopia marks a new position for humans in the universe. I see ourselves with others: with nature, not above it all, like it used to be. I see us as part of nature living in symbiotic relationships with other non-human beings, not separated at all. Sounds very hippie, but I think we need to see the world differently and change the direction, otherwise we will destroy not just the habitat of the other species but also our own environment.

Eventually I started to see Islands and individualism both more as separators than connectors; creating borders between things, not connecting any. Is this the thing I stayed stuck with, as I tried to imagine the ideal world? I realize now that utopia is something very different than just an image of an island, or an imagined place in time. It is More than a place; it is a mental state, something you want to believe in. Something you can imagine. It is Something more than reality we see. It is a path you follow with its guiding you.

The Expeditions (to places that don’t exist), installation consists of video, essay, and objects.The work is about my thoughts I’ve gathered together over my “island years”. I felt like I have been on a long expedition documenting things, learning new things, reading philosophy, something about physics and time, about ecological crisis and biology. I have been trying to see differently, learn as much as I can, and find new ways to feel nature and new ways to be WITH nature and WITH all of it’s beings and elements.

<3 books I have read in island residensies: